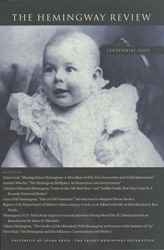 • Jennifer Wheeler, "The Hemingway Birthplace: Its Restoration and Interpretation"

• Clarence Edmonds Hemingway, "Letter to the Oak Park Boys" and "Sudden Death That May Come To A Recently Delivered Mother"

• Report of the Department of Military Affairs, January to July, 1918. Edited and with an Introduction by Ken Panda.

• Valerie Hemingway, "The Garden of Eden Revisited: With Hemingway in Provence in the Summer of '59"

• Steve Paul, "On Hemingway and His Influence: Conversations with Writers"

Young Hemingway, The Path to Paris, A discussion
Screening of a new Hemingway documentary: Young Hemingway: The...
END_OF_DOCUMENT_TOKEN_TO_BE_REPLACED