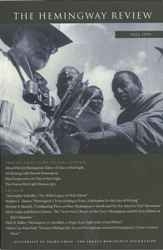 • About Patrick Hemingway, Editor of True at First Light

•      “Something Lost and Something Gained” by Rose Marie Burwell

•      “Reading Between the Lions” by Debra A Moddelmog

•      “The True at First Light Manuscripts by Stephen Plotkin”

• Stephen L. Tanner, "Hemingway's Trout Fishing in Paris: A Metaphor, for the Uses of Writing"

• Miriam B. Mandel, "Configuring There as Here: Hemingway's Travels and the 'See America First' Movement"

• Mark Gaipa and Robert Scholes, "She 'Never Had a Room of Her Own': Hemingway and the New Edition of Kiki's Memoirs"

• Thomas Hermann, "Quite a Little About Painters": Art and Artists in Hemingway's Life and Work, (Review) by Frederick Voss

Wyoming and Montana Conference Preview - Recording
In just over a month, many of us will meet out west for the...
END_OF_DOCUMENT_TOKEN_TO_BE_REPLACED