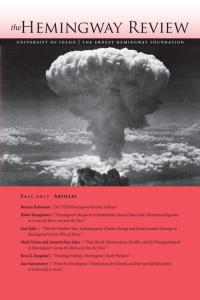 • Abbreviations for the Works of Ernest Hemingway

• Hemingway's Requiem for Battle Fields: "Atomic Jokes" Hiroshima/Nagasaki in Across the River and into the Trees by Hideo Yanagisawa

• "How the Weather Was": Anthropogenic Climate Change and Environmental Damage in Hemingway's Green Hills of Africa by Lisa Tyler

• Wise Blood: Menstruation, Fertility, and the "Disappointment" in Hemingway's Across the River and into the Trees by Mark Cirino, Amanda Kay Oaks

• "Dear Mr. Hemingway": Modernism, the Market, and the Fan Mail Reception of A Farewell to Arms by Jace Gatzemeyer

• Hemingway's "Now I Lay Me," Prayer, and The Fisher King by Peter L. Hays

• Current Bibliography by Kelli A. Larson

Wyoming and Montana Conference Preview - Recording
In just over a month, many of us will meet out west for the...
END_OF_DOCUMENT_TOKEN_TO_BE_REPLACED