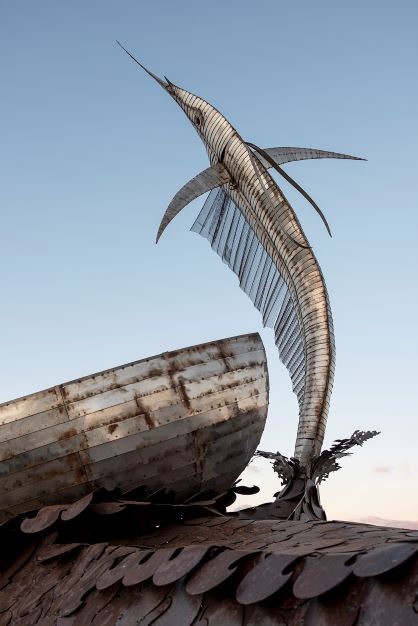 Jorge Isaac Medina, an artist who currently lives in Lanzarote (Canary Islands, Spain), created a sculpture called Pescador con Marlin (Fisherman with Marlin). This sculpture is a tribute to Ernest Hemingway's novel El viejo y el mar, inspired by a fisherman called Gregorio who was born in a small village meters away from where the sculpture is located.

Gregorio Fuentes Betancourt migrated to Cuba at the age of six and lost his parents during the journey. Hemingway and Gregorio got to know each other in the middle of the sea, during a tropical storm in 1928. The fisherman rescued Hemingway, a gesture the writer would never forget.

A very good friendship began that day, one that culminated in Hemingway’s novel The Old Man and the Sea. 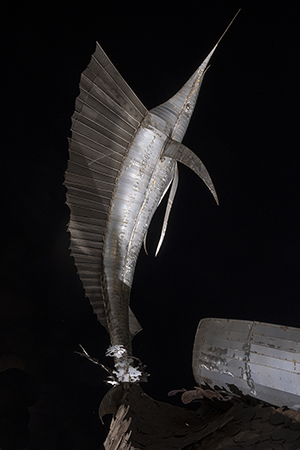 Medina’s impressionistic sculpture is made of weathered stainless steel. Its pieces have been hand-cut and hand-welded one by one without using any mold.  The measurements of the sculpture are 7.90 meters high (299 inches) and 8 meters in diameter (314 inches).

Just like the friendship between Hemingway and Gregorio, this unique sculpture commemorates a friendship woven by the patience of the fisherman and all their shared moments.

This tribute to Gregorio is also a recognition of all fishermen and brave people who fight for their catch, battling to keep it, not letting it escape. It represents the journey of a hero. A man, in front of an enormous fish which will not be caught, represents a dance in which they both measure their resolve. The fisherman, alone in the sea, connects with his own power, thanks to the fish.

Pescador con Marlin is an inspiring artwork that explores the internal fights we all have with our essence, our deepest truth. 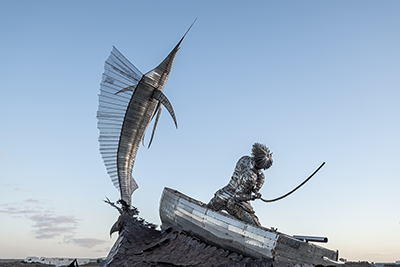 Jorge Isaac Medina has been involved with design and sculptor for more than 25 years.  He presented the proposal for the sculpture at the Town Hall in Arrecife, the capital of the island of Lanzarote, and it was approved and green-lighted by Mayor Astrid Perez.  It took him nine months to complete the sculpture.  The Old Man and the Sea has been a source of inspiration ever since he was a child, and it has been a lifelong dream of his to be able to represent the scene of the fisherman's encounter with the fish in such a dramatic and moving moment.  His pieces and collections can be viewed at jorgeisaac.es

Josep Salip is a 69-year-old amateur photographer from Barcelona who currently lives in Blanes, a town in Costa Brava (Girona, Catalonia, Spain).  He has been working over the past three years on his personal project, capturing handcrafts on the island of Lanzarote (Canarian Islands, Spain), which he aims to portray in a book titled Lanzarote, Geografía Humana y Paisaje. The book is about the artisan trades of the island that have been gradually fading as a result of new generations not inheriting them.  Josep has always worked with solidary and social movements. His fields of expertise are landscape and street photography.  His work is on Instagram at @josepsalip