Skip to main content
Home Hemingway Review Blog The Saga of the Socket Photo, Part I

The Saga of the Socket Photo, Part I

A few years ago, during a mini-symposium hosted by the Key West Historical Society for the annual Hemingway Days, Kirk Curnutt, one of the event's keynote speakers, flashed on the screen a photograph that caused the audience to audibly gasp. It was a naked Hemingway. More accurately, it was a photo of Ernest not entirely naked, but close to it. The photo showed him standing on a beach, wearing some sort of gift from the sea (a conch shell? maybe some seaweed?) on his head, and over his genitals what at first glance appears to be a teacup on a string. 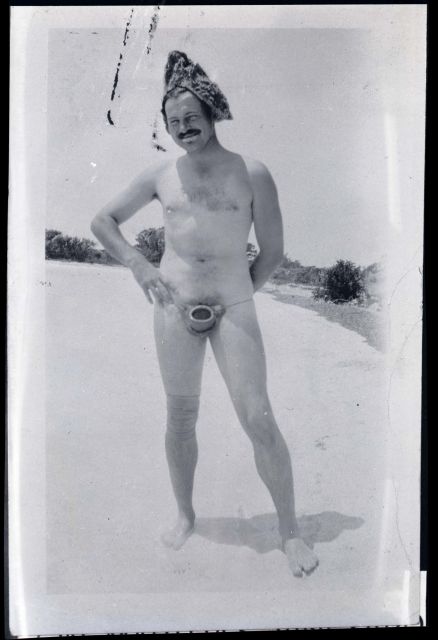 Hemingway's fanciful codpiece is actually a fishing gimbal, also known as a "fishing socket"—thus giving this photo its nickname: "The Socket Photo." Gimbal belts are used primarily in offshore fishing, for fighting large fish. They are designed so the butt of a fishing rod seats into the socket, securing the rod to one's body, creating a fulcrum and lever point that reduces the amount of energy needed to haul in heavy fish. If you peruse old pictures of Hemingway dressed in fishing attire from around this time period, you will most likely notice that he is often wearing a fishing socket slung casually to the side of one hip.

This photograph turns out to have had an interesting history, including an erroneous published attribution by one of Hemingway's friends and a bout of censorship involving an ex-friend.

I hadn't thought much about the photo until a fellow researcher recently wrote me asking if I had any idea what Ernest was actually wearing in this photo—which would have been an utter mystery to anyone not familiar with game fishing. This prompted me to pull out a copy of A.E. Hotchner's 2008 compilation The Good Life According to Ernest Hemingway, which I knew had a clear reproduction for examining details. On page 112 Ernest's pal and biographer shared the Socket Photo, captioning it on the opposite page "Frolicking on the Riviera."

Wyoming and Montana Conference Preview - Recording
In just over a month, many of us will meet out west for the...
END_OF_DOCUMENT_TOKEN_TO_BE_REPLACED